Science of the Stars

Some people believe that astrology should be considered a science, here’s why it shouldn’t

Thousands of magazines across the country print horoscopes and millions of people read them every day. But can we rely on what they say?

The answer is no. Astrology can be a lot of fun, but it’s not a science, because it’s simply not scientific.

According to the scientific checklist, astrology doesn’t quite make the cut.

In order to be science, astrology must pass the scientific checklist

Astrology does have a focus on the natural world. The whole idea of astrology is studying the patterns of the stars and planets.

And technically, it aims to explain the natural world. Astrologists use the stars and planetary movement to predict traits and basic events. The sign used for daily horoscopes is your sun sign, astrologists look at where the sun is in the sky and based on where it is predicts basic events in your future.

But here is where astrology starts to stray away from being a science. It doesn’t use testable ideas. There is no way to test the accuracy of astrology because none of its predictions are very precise. Anyone who’s read a horoscope knows that they are very vague, so how are you supposed to truly prove a theory when any turn out could be seen as supportive? It’s an experiment where the outcome is completely based on your thoughts.

“It doesn’t have any of the things we expect if a science,” said middle school science teacher Christopher Bright, “it’s not something that’s readily testable or when it is tested it doesn’t show any real predictability.”

What makes astrology even more untestable is the lack of usable evidence. Opinions don’t count as evidence and what astrology relies on are people’s opinions which aren’t considered scientific evidence, because they can’t be proven.

Often times, people who believe in something are more likely to see proof of it than those who don’t believe. The same can be applied to astrology, those who believe in it will see a resemblance between their horoscopes and daily lives while those who don’t are less likely to see similarities. So with people’s beliefs polluting the results, there is no way to achieve an accurate answer.

This leads to no ongoing research involving astrology. Astrologists do their work, and that’s that. They don’t continue to test the idea. They don’t wait and see if their predictions are correct. There is no continuation of the theory they have created, which is a fundamental part of science.

Along with this, the astrology community is known for its lack of scientific behavior. They don’t form hypotheses or set up experiments. And they don’t wait for further research to support them. They simply say that things are going to happen and that’s that with no continuity on their study. Not to mention that they generally ignore contradictory evidence.

Honestly, astrology can be a lot of fun and a great way to pass the time. Who doesn’t like hearing about their love life and future career? But it’s not something to take seriously. It’s nothing but a bit of fun and games.

“No, not really. It’s kind of like a fortune telling, it’s not necessarily like a super proven thing. I don’t think like when you were born or the time really has much of an impact on how you are.”

“Astrology attempts to explain the natural world, but it is not validated by evidence. In the scientific community, ideas are validated and or altered against evidence. Therefore astrology should not be considered a science, but rather a belief.”

“No. I think astrology is more belief based than science based . . . you wouldn’t have enough to really base it as science. It’s an evidence problem.”

“I don’t find it to be very factual. [But] if it’s using evidence. . . and all that kind of stuff then I would probably say yes.”

We asked 115 students whether astrology should be a science or not, here’s what they said. 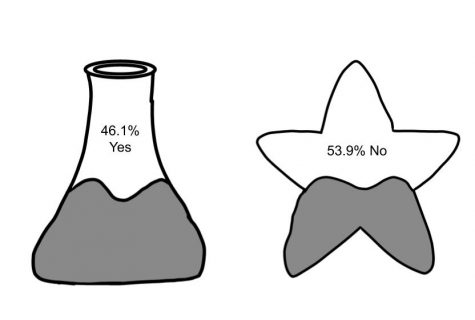