TERRY WALTZ, age 61, born in 1958, from Salem OR, passed Nov. 21, was a woman larger than life, told by all her loving coworkers. Through and through, not a single person in the special education department could say they weren’t impacted by her. Instead, they told of all their favorite moments from her career.

She was known as “the special education mom” by staff and students. Literally, she was the secretary of the special education department, but she was also the glue that held everything together. She kept up on staff members’ expectations, and was noted as “always a rule follower” by Structured learning teacher Casey Horn, keeping students on track and making sure the special education staff was doing the best they possibly could. Her stern demeanor, honest work ethic, and mentality inspired her co-workers and made her the person to go to for any situation.

Waltz worked at West Albany for 13 years, with her first two working as a Special Education Assistant (SEA) for then special education teacher Rich Engel. In her early days she took Horn under her wing. “She was really instrumental in me having success in my job, and anything I’ve done is a big credit towards her. She always had what was best for me in her interests… she had my back from day one.”

When Waltz joined the staff at West Albany, the special education department was smaller, and she would quickly make a lasting impact.

“A lot of kids, they just gravitated toward her,” Engel remembers, “and would go to her when they were having problems, not necessarily to their case manager.”

And what she did, she did well. “[If] I have a question about the law or where do we process this paperwork, you went to her, because she knew exactly how everything was done … She was kinda the glue that held us all together,” special education teacher Tracy Stinson said.

Beyond work, Stinson finds difficulty in daily life without her.

“It’s all just, really really hard, to pull in every day and her parking spot is empty. You walk by her room and there is somebody else in her chair.

It’s just so hard …. We don’t have our person anymore.”

As well, Engel misses her energy in the mornings, and Horn misses her stern discipline.

Special education teacher Carrie Coates remembered, “She never gave up on students. Students would come in and you would just think, uh oh, [still] she always had a smile on her face. They always knew that she was somebody they could go to even if nobody else would listen. And it was the same for teachers; if one of us was having a bad day, she would notice right away and she’d ask about it, even when she was going through her own sickness, she would always ask somebody else first about how they were doing.”

The legacy Waltz leaves behind at West Albany High School is one of being the glue, and the mom, and most importantly, a bulldog. As Engel said, her spirit and loving nature made her perfectly fit for the role. Whether she was helping students, or staff, she always worked with integrity. 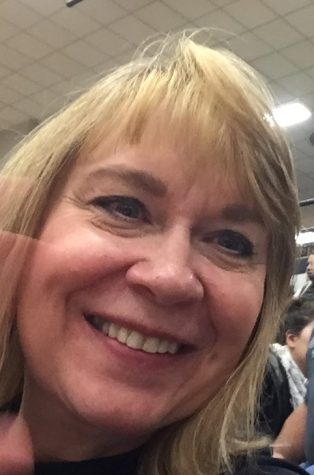