How can we find the line between disorder and personality? How do we cope with the finality of diagnosis? 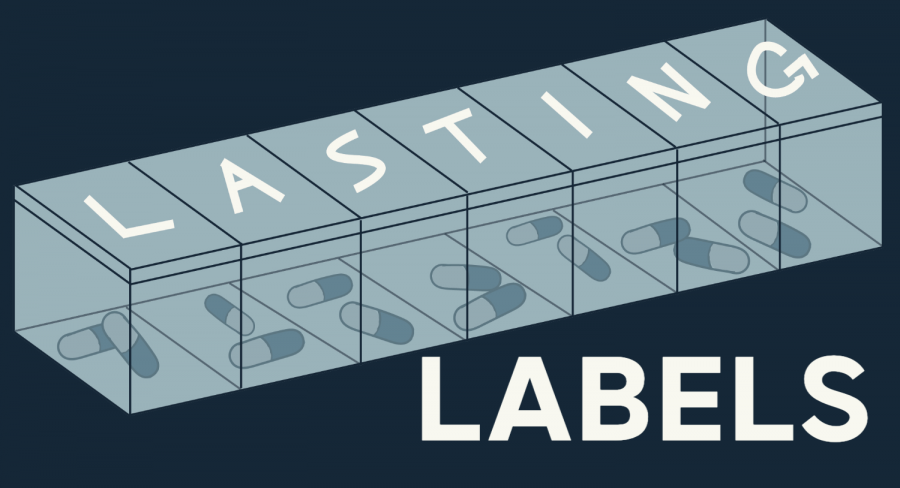 The first thing I do when I wake up, the last thing I do before I fall asleep. Keeping me sane, keeping me terrified. Everyday, twice a day, I take my medication. Every time I am reminded of what I have to do not just for now, but for the rest of my life.

It wasn’t always like this. I was diagnosed with anxiety and depression during middle school and that felt fine. They weren’t wrong per say, but something wasn’t right. It accurately represented some symptoms of the issue but not the whole. I was medicated and it was okay except when it wasn’t, and around April of last year things reached a boiling point.

On the outside it wasn’t very climactic; I did bad things, I got caught, I got in trouble, period. My perspective was a bit more surreal. I wasn’t doing it because I wanted to, I was doing it because I had to. There was boundless energy thrumming inside of me and without an outlet I felt like I could die. The energy turned into crazy decisions and unfortunate outcomes. With the feeling of being on top of the world comes the feeling of the fall. The feeling of hitting rock bottom down below.

Talking to doctors was never my favourite thing but I always had so much anticipation for the appointments. I had so many things to say, so many long-shot diagnoses I thought could fit me, so many things about myself I thought I could get fixed. I made the lists and then when sitting in the the blank white rooms in the presence of the person who could help, I forgot them.

But I remembered to tell my doctor what I did, why I did it, how I couldn’t keep feeling like this, whatever this was. I told her that there was something else wrong, that Prozac wasn’t working right, that it made me less sad but more manic and I couldn’t handle it anymore.

So, I was taken off of it for the first time in four or so years in May and the sadness came back. The place between episodes became more extensive, rock bottom got that much deeper, and I spent the entire summer alone. It felt like a paradox; I was miserable and lonely but I couldn’t be around people because when I had episodes, I became them. The person that was wasn’t very fun to be around. 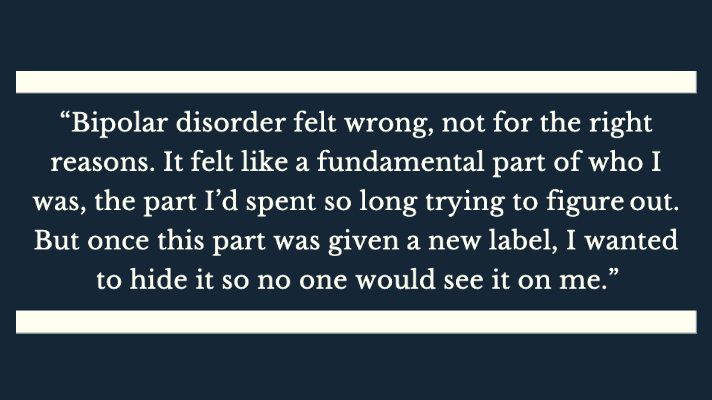 Then, a new therapist, a new medication, a new diagnosis. Bipolar disorder felt wrong, not for the right reasons. It felt like a fundamental part of who I was, the part I’d spent so long trying to figure out. But once this part was given a new label, I wanted to hide it so no one would see it on me. I felt ashamed for what had always been a part of me just because it’s new name instilled embarrassment and fear in me.

Before the diagnosis, I was only emotional. I didn’t think before I acted, except for when I overthought everything. I didn’t care about what other people were thinking about me except for when I cared so much it consumed me. I was just temperamental, hard to pin down, inconsistent, and unpredictable. It was who I was, simply my personality. Now I’m not so sure.

Telling people before was like a tagline; I’m Mattea and I’m depressed! I have panic attacks and generalized anxiety! Those were things people knew. Things they’ve probably seen up close and felt the effects of. Telling people I’m bipolar is a different story; one I barely even know yet because I’ve shied away from telling anyone. If someone needs to know, they know. I used to wear my disorders like a badge of honor. Now, the thought of everyone seeing my diagnosis is a nightmare. It feels like that would be all they see.

I don’t tell people about my correct diagnosis because I don’t want the stereotypes of mood-swings and insanity to be how people think of me. I don’t want my disorder to be me. That stands both in public perception as well as who I am as a person. My entire life I’ve felt the effects of manic and depressive episodes and I’ve assumed they were simply personality traits. Now, I’ve been told they’re more of a fault in the system.

I know who I am with my disorder and I will never know who I am without it. That’s just a fact I have to live with. Mood disorders are lifelong and even with treatment cannot be cured. Because of this, my bipolar disorder is part of my personality and taking my prescribed medications twice a day is part of my lifelong routine. I’m still learning to cope with this finality. I’m figuring out that some things will never change.