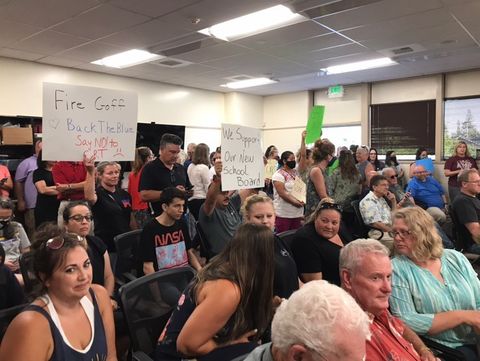 The School Board Rundown

If you’ve missed the last six months of events surrounding the school board, here’s a check-in. After the district announced a new common West Albany-South Albany schedule, students walked out in protest of the change on June 8. At about the same time, the outgoing school board approved an extension to then-Superintendent Melissa Goff’s contract, which added a year and raised her salary. The new contract also included a no-cause termination clause. On July 1, three new school board members were sworn in after a contentious election, and then they elected a board director as the new board chair who had previously been censured and asked to resign. Fourteen days later, the new board fired Goff without cause or explanation, in line with the terms of her contract. On July 26, the board interviewed and hired Rob Saxton as interim superintendent. The search for a permanent superintendent is currently ongoing.

How we got to this point

A colorfully painted mural acted as the backdrop to five wooden desks where the school board members sat to discuss the future of Superintendent Melissa Goff’s contract. Goff was not present at the July 14 meeting.

School Board Chair Eric Aguinaga projected his voice into the politically divided crowd as he read out the proposed motion from his agenda, a no-cause termination of Goff’s contract in which she would officially be fired from her position as superintendent in 10 days’ time and given one year’s worth of salary and benefits as compensation.

The crowd became a sea of incomprehensible interruptions as Aguinaga continued to recite the proposed motion. Every community member seated in the crowd of the meeting had an opinion, a story to tell for why they were there. Some had signs defending their stance, while others sat in silence and watched as Auginaga read from the piece of paper resting on his desk.

Long before this heated July meeting, community members began to form their opinions around Goff’s decisions as a disconnect between her supporters and critics began to grow.

The 2020-21 school year hosted a myriad of issues that the district leadership had to find quick solutions to — distance learning approaches, quarantine rules, return to in-person learning and mask mandates, police presence at schools, and high school schedules were just a few. As Goff made decisions on what those solutions would be, the gap between her supporters and her detractors widened.

At the July 14 meeting, in front of a room full of protestors and a camera streaming to over 90 viewers, the motion to fire Goff was passed after less than 10 minutes of debate surrounding the subject. The three new board directors Pete Morse, Roger Nyquist, and Brad Wilson voted in favor of the contract termination, while board chair Aguinaga abstained and returning board director Michael Thomson voted against.

Thomson was the only member to debate and subsequently vote no on the motion, and his disagreement with the rest of the board was met with a mixed reaction of support and disapproval from spectators. In the case of Goff’s termination, the motion was first discussed in a closed executive meeting with attorneys present, and it was decided that the board members would vote in a public meeting.

Thomson, despite the disapproval of the rest of the board, began his counterargument against the movement to terminate Goff’s contract. His points centered largely on the fact that the termination was invoking the no-cause clause in the contract, which means that no reason had to be given for the termination as long as Goff received one year’s worth of salary and benefits as well as a notification of her termination 10 days in advance.

Thomson began his speech with a complaint about the financial irresponsibility of the decision to fire Goff. Even months later, he sees the termination as a waste of money, “without a doubt.” When you add a one-year salary of the superintendent to other benefits listed in the contract, firing Goff meant paying her around $200,000 directly from the district’s budget.

“I understand that no-clauses exist, but they exist for lawyers and mediators to come to a resolution,” Thomson said during the meeting. “I’m asking you as a parent and a community member, ‘Why?’ What is the community supposed to think?”

Thomson then went on to speculate about the reasons for firing Goff, telling the other board members that a no-clause termination is not transparent enough to satisfy the community. His arguments included the references to emails the board had received thanking Goff for her work toward equity among marginalized students.

“I think they decided early on that they just were not going to be able to work with her,” Thomson reflected on the meeting, months afterward. “And I think they were not willing to pursue that for a cause and I just think that’s just an easy way out.”

Aguinaga thinks that the board’s decision was the right one for the Greater Albany Public Schools district. “There’s no bad people in the situation,” he said, “but sometimes things aren’t just the right fit.”

In terms of the money that the district would have to pay out to Goff as compensation, Aguinaga feels that it was worth the sacrifice, and there have been changes made in hiring choices since her termination  in order to offset the cost.

“There’s two positions that are top level administrator positions that we have not replaced because they’re not necessary at this time,” Aguinaga said. “So some of that has absorbed and gone over the cost of what we are contracted to pay Mrs. Goff.”

According to Aguinaga, the Secondary Director and Public Information Officer positions are not being filled for this reason. However, the Public Information Officer position is currently posted on the district’s job vacancies list, along with the Director of Business and the Health Services Coordinator positions. Several district leaders publicly resigned following the change in leadership, leading to some of these openings.

At the July meeting where Goff’s contract was terminated, the announcement was followed by the crowd erupting into a mix of cheers and yelling.

Among Goff’s supporters, a chant broke out, and the rest of the noise was drowned out by dozens of voices screaming, “We support Goff!” in solidarity with the former superintendent.

“I feel like this board ran on a platform that was criticizing the transparency of the leadership of our district,” supporter Samantha Shealy said after the meeting, “and they have shown zero transparency so far in their agenda. I feel like it was completely unfair that they did not use any feedback from the community that they have gathered while they have been in office, and that in itself is an egregious act.”

Others supported the actions of the board.

“I’m for the students of Albany public schools,” April Bennett said, “and I think our students need to get a good solid education that’s going to move them forward and give them opportunities to make a brighter tomorrow… I don’t think that the way things have been going in Albany public schools, that Goff is the one to lead us.”

Not long after the termination of Goff’s contract, the current board interviewed and hired Rob Saxton as interim superintendent in a public board meeting on July 26. The board requested public input beforehand after sharing information about Saxton, then questioned him during the meeting, asked him to step out as they discussed, then offered him the position. No other candidates were interviewed.

“I knew that it would be a big task and that there was a lot of work to do,” Saxton said. “I also really think what happens in education is incredibly important and that it needs to go as well as it can. If you’re like me, there’s an opportunity for me to help, and here I am.”

The search for a permanent replacement

Thomson is hopeful that the district can move past national politics and put the culture wars aside, and think more in terms of the students’ best interests.

Aguinaga has similar hopes, especially as he believes another local bond measure is likely to be put forward in the near future.

The search for a permanent superintendent is currently underway, and began with the board hiring a search consultant firm, McPherson and Jacobson LLC. A timeline to hire a superintendent was established on Sept. 27, and if all goes according to plan, a new superintendent will be hired by mid-February.