One in six Gen Z adults identify as part of the LGBTQ+ community, and that number continues to grow as teens explore their identity 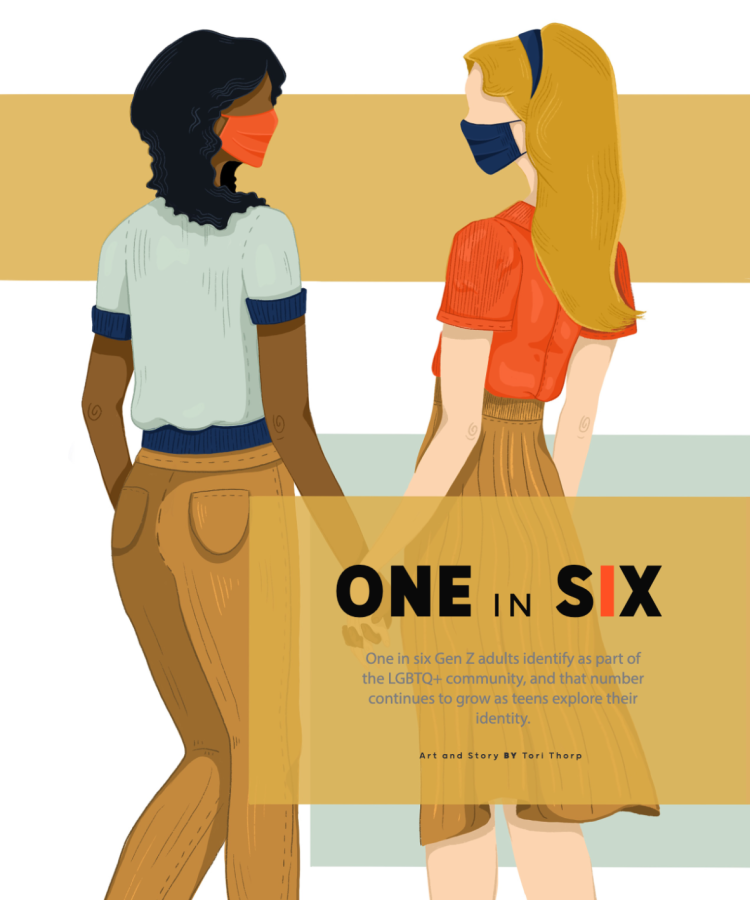 In February of this year, a new in-depth study of America’s sexuality done by research company Gallup revealed that one in six Gen Z adults identify as part of the LGBTQ+ community, and that number is only expected to grow. The study surveyed over 15,000 Americans that were over the age of 18 and found that 15.9% of all Gen Z adults are not straight, with 78.9% identifying as heterosexual, and 5.2% having no opinion on the matter. This is the highest rate of LGBTQ+ adults in any generation since Millennials, in which 9.1% identify as LGBTQ+. In an average-sized class of 30 students at West Albany, according to Gallup’s study, at least five of those students will grow up to be an openly LGBTQ+ person as an adult.

On-trend with the growing number of LGBTQ+ adults, more Americans are supportive of equal rights for all sexualities and gender identities than ever, which is one of the reasons experts at Gallup and other research organizations predict that more people feel comfortable living as openly queer.

Junior Andy Craig has long been a supporter and ally to the LGBTQ+ community, and he feels that the progress society has made toward acceptance and equality is essential, but not nearly where we should be.

“We are definitely advancing to a more progressive society,” Craig said, “but we’re coming from burning these people for feeling a certain way to being tolerant of them, and we still have a long way to go before there’s equality.”

Support for LGBTQ+ marriage is up by 4% since 2019, according to a study done by Gallup that found that 67% of all Americans in 2020 believe that marriages between same-sex couples should be recognized by the law as valid and with the same rights as traditional marriages, in comparison to the 63% that thought this was true in 2019. The acceptance rates for the LGBTQ+ community have been steadily increasing but have jumped to over half during the 2000s.

The network of social platforms that are available to young people where they can freely explore and express their sexual and gender identity anonymously or in a community of online friends has also contributed to the influx of teens identifying as part of the LGBTQ+ community. As more resources become available online, students are able to access more information that was at one time out of reach to them. This means, inevitably, more exposure to diversity of all types.

Junior Sachi Wrigley began their journey of self-discovery on social media and continues to question through online platforms.

“I wouldn’t have known anything about labels or sexuality or gender identity if I hadn’t been on social media because I come from a pretty conservative town so I never considered any of it,” Wrigley said. “I just knew there are gay people and there are straight people, and I assumed I was a straight person.”

Wrigley currently identifies as aro-ace and agender, meaning they have no relationship with gender and they don’t feel romantic or sexual attraction of any kind. The most common misconception Wrigley faces is the assumption that being aromantic and asexual is a sad, difficult thing.

“A lot of people have a complicated relationship with their sexuality, and a lot of times I’ve had to tell people that me not experiencing attraction isn’t sad,” Wrigley said. “I can still enjoy life because it’s not all dependent on that one thing. As much as the misconceptions hurt, there’s a support system, and we have the internet at our fingertips, so you can always look for those people that will support you.”

Although the internet is seen by many as a retreat to a more accepting community, there are also those online who don’t agree with the LGBTQ+ community living openly.

“Anyone with an opinion can put anything out on social media,” Whiteside said, “whether that’s someone who is homophobic and saying gay people are going to hell or someone gatekeeping the gay community, telling people they don’t look gay or they do look gay.”

The stereotypes for each sexuality have reached their peak due to the internet and the collection of memes, chat groups, and discussions that continue to build up in the archives of the web. As more stereotypes appear, others are shut down or even replaced. Regardless, the journey of sexuality and gender orientation that many teens have embarked on due to the internet and a more accepting environment is a long, occasionally stressful, and often controversial topic. Still, 15.9% of adults in Gen Z have found their way to living an openly LGBTQ+ life.

“Questioning your sexuality is realizing that you’re not what you’re expected to be,” Whiteside said. “Maybe you find the perfect label on the first try, and maybe you don’t. There’s always going to be a community of people that will accept you for wondering and questioning, and it’s okay, and it’s normal.”